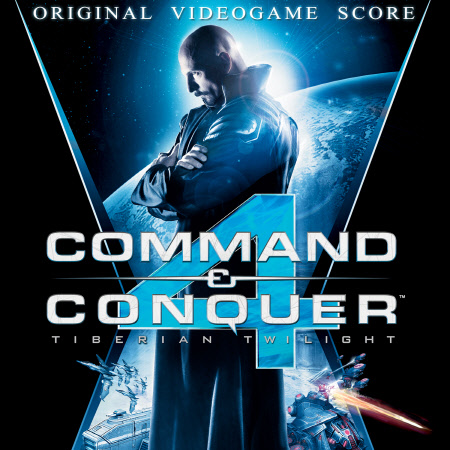 In 2010, Command & Conquer 4: Tiberian Twilight completed Command & Conquer's Kane saga to mixed results. While the real-time strategy gameplay of the title proved controversial, many still praised the presentation of the game, particularly the graphics and score. The score for the game aimed to be more cinematic, dramatic, and dark than each of its predecessors, following the precedent set by other action titles of the age. An ensemble team comprising lead composer James Hannigan, Red Alert 3 returnee Tim Wynn, and series newcomer Jason Graves, supported by the London Philharmonia, took an ambitious approach but did it pay off?

The main theme for Command & Conquer 4: Tiberian Twilight, "To Save Humanity", has all the qualities of a cinematic epic. Hannigan was clearly inspired by Jerry Goldsmith's Star Trek: The Motion Picture while composing the theme, but still makes it his own, offering distinctive themes and a modern orchestration approach. The track evolves from a wistful dance-like introduction, exhibiting fantasy colours comparable to Hannigan's Harry Potter compositions, into a full-blown march featuring bold spacey orchestrations. The London Philharmonia convey the exact intentions of Hannigan, successively conveying intimacy, aggression, and grandeur through the extensive development, fully demonstrating what an orchestra can bring to a score production. The composition provides a solid thematic basis for the rest of the score and, whether portrayed in the reflective piano and strings piece "Welcome Back Commander" or the action-packed choral theme "Bad To Worse", Hannigan integrates it in a distinctive yet restrained manner.

The two co-composers bring their distinctive approaches to Command & Conquer. Many of Jason Graves' contributions to represent the G.D.I. campaign evoke memories of his score for Dead Space. An ever-evolving piece of ambient soundscaping, "Transport Down" is spectacularly haunting in context with its sporadic orchestral phrasing and drawn out string glissandi. Action cues such as "Entanglement", "Love and Death", and "Cold Hard Truth" meanwhile are major highlights on the stand-alone release. Perhaps it is their rhythmical qualities, or perhaps it is simply their raw timbres, but there is always something dangerously attractive about Graves' more dissonant cues. However, not all of Graves' contributions are brutal and there are some gorgeous moments too, such as the elegaic string-based introduction of "Paradise Lost", that is highly affective in and out of context.

The contributions of Tim Wynn to represent the Nod campaign blend orchestral, ethnic, and contemporary elements. "Things Fall Apart" offers an entirely different aesthetic to the contributions by the other two composers, emphasising ethereal ethnic vocals, sampled percussion loops, and Arabian instruments above orchestra performances. Such tracks certainly evoke memories of Command & Conquers: Generals and seem fitting to portray the Abrahamic influences of Kane's faction. Others such as "We Rise" and "To the Death" feature such explosive polyrhythms and hybridised timbres that they're reminiscent of Amon Tobin's works. Wynn is also responsible for one of the most evocative themes on the score, "The Pacific Hub," which features a stunning soprano performance. When combined with Hannigan's sci-fi orchestrations and Graves' horror-influenced contributions, Wynn's contributions certainly bring a lot of diversity to the score and help to individualise the factions.

The score's masterpiece is Hannigan's "The Prophet's Ascension". Despite being intrinsically minimalistic, this composition encompasses a great emotional range during its 11:27 playtime. Opening as a resonant string adagio, the composition gradually introduces new phrases above a bittersweet chord sequence. The choral work from the four minute mark is beautifully interweaved with the strings and captures the spirituality and humanity lying behind the theme. By the final few minutes, the composition takes a sinister turn with brassy fanfares and a string crisis motif, though still maintains the same chord progression throughout. The work culminates in the most spectacular sequence in the entire score, particularly when used in conjunction with the cinematic score. Hannigan closes the album in a remarkable way, hybridising stylistic features of earlier themes by himself, Wynn, and Graves into a dynamic and emotional theme, "The End of All Things".

Overall, the Command & Conquer 4: Tiberian Twilight Original Videogame Score is a highly accomplished production. Following the factory-produced tedium of Command & Conquer 3: Tiberium Wars and the intentionally over-the-top nature of Command & Conquer: Red Alert 3, it is pleasing to say that the series has at last succeeded in producing a very mature cinematic score. Overall, an effective musical conclusion to the Kane saga and a must-purchase for fans of dark cinematic music.